Art, a tangled web of delight, destruction and propaganda

“A growing number of astronomers have debunked the Big Bang Theory in the light of a series of hypothetical amendments; such as the unscientific dark matter, inflation and dark energy, thrown at the theory to keep it alive. The concerned astronomers believe the physics for the theory is fundamentally wrong. Yet, falsified research moves forward, to validate the money that has already been thrown at it and to prevent exposure of the con.

‘In 2004, a group of about three dozen scientists founded The Alternative Cosmology Group as a first step towards redressing the balance. They wrote an open letter, published in New Scientist magazine (22 May 2004, p20), highlighting the imbalance of research funding and the suppression of free debate in cosmology.’ Edmund F Wood

To authenticate aliens the Big Bang Theory is indispensable. However, in the face of compelling Big Bang faulty physics, the alien hoax conveniently moved from a physical explanation to an Interdimensional one, spiritualising them. This is closer to the truth as these aliens have para-normal demon like qualities. Within the rise of the New Age movement Ufology has morphed into a religion, that plays with dark forces.

In efforts to validate the UFO “religion”, Gothic and Renaissance art has been erroneously interpreted to support historic contact. Early European art was Vatican controlled. Today’s viewer will see the moon and sun looking as if they are “people” or “aliens” in spaceships.  Romanism is Mithraism, the Ancient Mystery Religion and in Romanist art the sun and the moon are Mithra gods and goddesses. Art historians understand strict Roman Catholic treaties that art adhered to. These paintings are not evidence of UFOs.

The Vatican have full time astronomers working on serious research with the aid of their telescope they named (acronym), LUCIFER, situated at Mount Graham, USA on sacred Native-American land. The tribe contested the use of this land, taking the Vatican to court – the Vatican won.

The Vatican has spent a lot of time and money looking for aliens and co-hosted a conference in Arizona seeking Alien life in the Universe in 2014. The Roman Catholic Gnostic beliefs about Christ and Sun-spirituality as part of Mithraism keeps them focused on the heavenly bodies.

Professional astronomers as Valle, Hynek and John Keale suggest, UFOs are from another dimension and possibly demonic. Yet the Vatican calls ETs space brothers.

Jesuit Guy Consolmagno, astronomer, Director of Vatican Observatory, stated there would be no discrimination in baptizing extra-terrestrials into the Roman Catholic Church, ‘No matter how many tentacles it has.’

The Vatican and like-minded unelected leaders at the United Nations are united in their direction, so it is not surprising that the Vatican, UN and CERN are all in partnership.’”

Excerpt from We Are Revolting: The Inconvenient Truth, by Antoinette James

From early Papal Roman art through to Byzantine and up to the Renaissance and Martin Luther’s Reformation in the sixteenth-Century, Papal Rome, now known as the Roman Catholic Church used Egyptian and Babylonian ancient mystery symbolism in art. These symbols can still be found and are still used in Mass rituals in Roman Catholic Churches and cathedrals today.

Odd shaped clouds, Mystery-Religion-gods in the heavens especially the sun and the moon were common. Beams of light, light-drenched rips in the clouds, shepherds with their dogs in classic pose with one hand over brow as they looked up at the Angel Gabriel, are all in keeping with Roman Catholic treaties of art.

Artists of the Dark-Ages would not dare insert any non-canonical or un-codified element into a religious representation. Nor would those commissioning the art, in fear of excommunication from the church –

the torturous hand of the Inquisition –

and death by fire at the annual auto-da-fé.

So, why the confusion? The starting point is one’s atheistic Darwinian 21st Century world-view in interrupting historical art. Today we may not have the Inquisition to keep our world-view in check, but we do have as much a convincing force through –

and ill-written fictional novels to “guide” thought. To use a 21st Century world-view to interpret art, hundreds and thousands of years old is naive, embarrassing and, well, ignorant.

Instruction about Mithraism, the true religion of the Vatican will unlock Roman Catholic art. Citing other religions’ art is no defense, as all religions stem from Mithraism as archaeologists can track through their research. Mithraism is Sun worship and the only “religion” that does not worship the sun or have sun symbolism is Protestant Christianity. UNESCO and United Nations documentation confirms this.

However, let us put aside Ufology and Mithraism ideologies and beliefs and enjoy these wonderful pieces of art…

The Annunciation, by Carlo Crivelli 1486 – 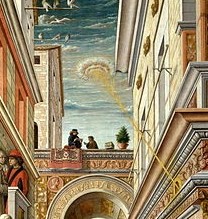 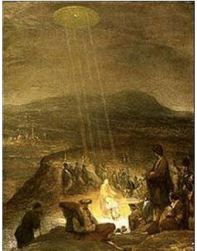 These paintings are glorious!